This September, join us for a week of engaging talks ranging from Concept Art to Motion Design! 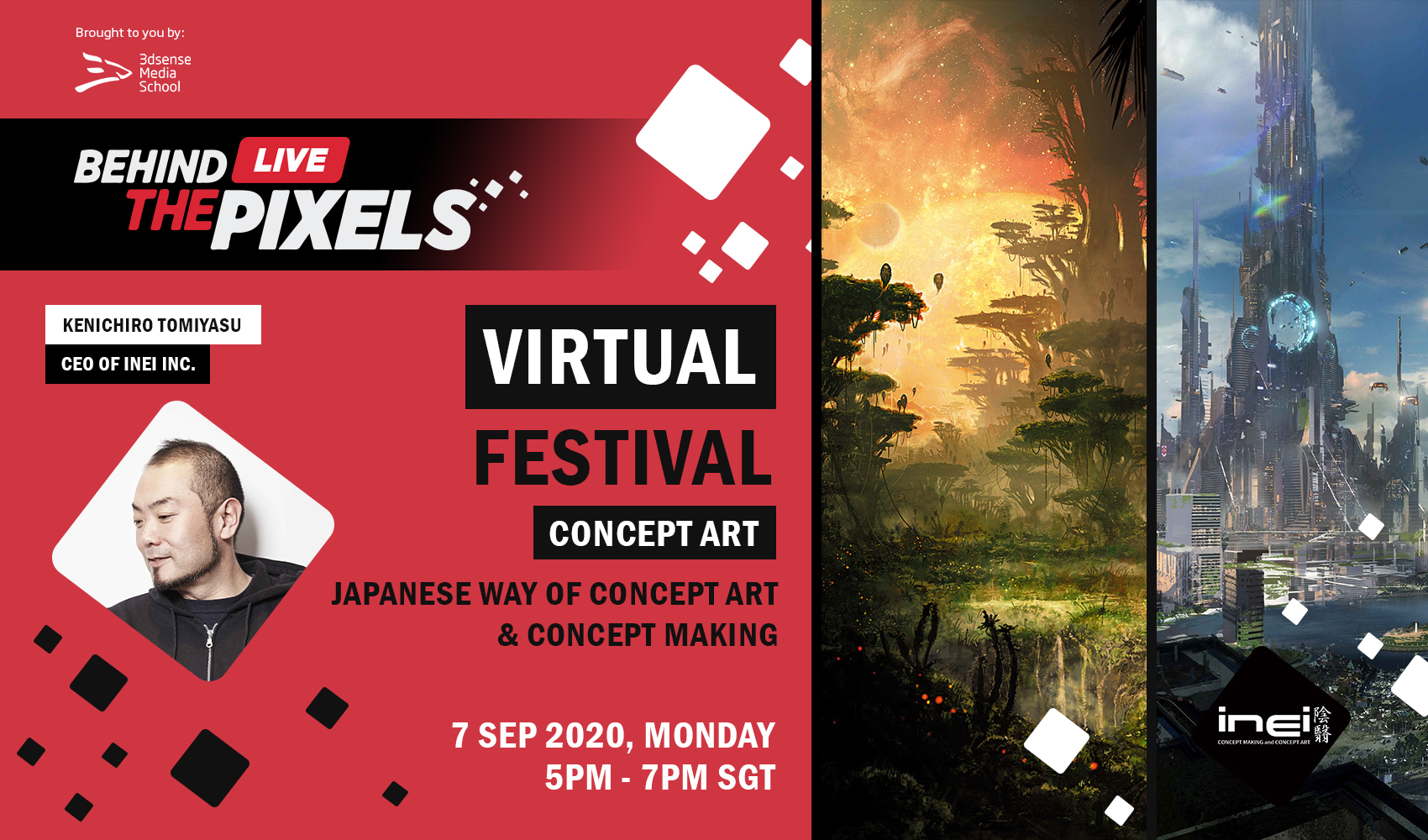 Curious about the Japanese Concept Art industry and how renowned Japanese artist, Kenichiro Tomiyasu, creates his artwork? In this session, we will be brought into the amazing world of INEI’s artwork as well as a Live Painting demo with the legend himself! It’s going to be a visual treat!

In his spare time, Kenichiro is an avid classic car enthusiast and can often be found doing upgrades on his Volkswagon Bus. He also enjoys building models. 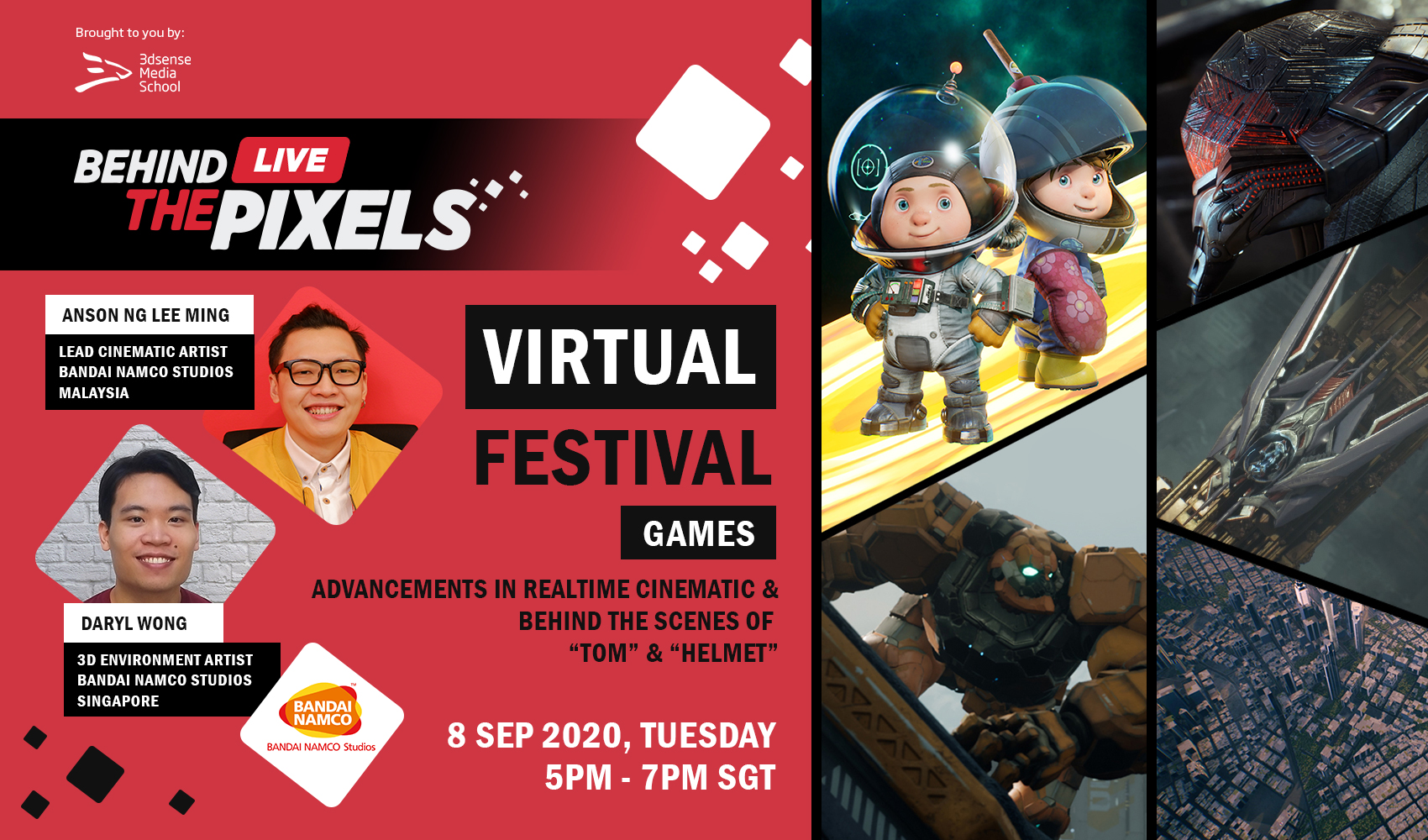 Games: Advancements in Realtime Cinematic and Behind The Scenes of "Tom" & “Helmet”
By Anson Ng Lee Ming and Daryl Wong

Technology has never slowed down and we are constantly evolving as digital artists. In this session, Bandai Namco Studios Malaysia and Bandai Namco Studios Singapore will share with us their insights on Realtime Cinematic production - how and why they use a game engine to produce their cinematics, as well as look into some of the new features available in Unreal Engine and provide an overview of some of the technical aspects involved in production.

Furthermore, we will also go behind the scenes of their Demo short film of "Tom" and Sci-Fi short film of “Helmet”, which was developed in-house using Unreal Engine. We will take the journey to understand how the film was achieved from concept to final product, and specifically how ‘proceduralism’, which is fast becoming the standard in a game industry pipeline, was being used. Join us for the ride!

Anson is a Lead Cinematic Artist at Bandai Namco Studios Malaysia with 3 years of working experience. He had led 2 company demo projects focusing on the fields of realtime cinematic tools. Anson enjoys music in his free time, especially the lesser known instruments. He also dwells into the field of scale modelling and photographing miniatures.

Daryl is a 3D Environment Artist at Bandai Namco Studios Singapore with 4 years of working experience. He has worked on game asset creation, lighting and Houdini tools for environment creation. He has worked on UE4 games for consoles like Ace Combat 7. His hobbies include playing video games, reading Sci-fi novels and drawing. 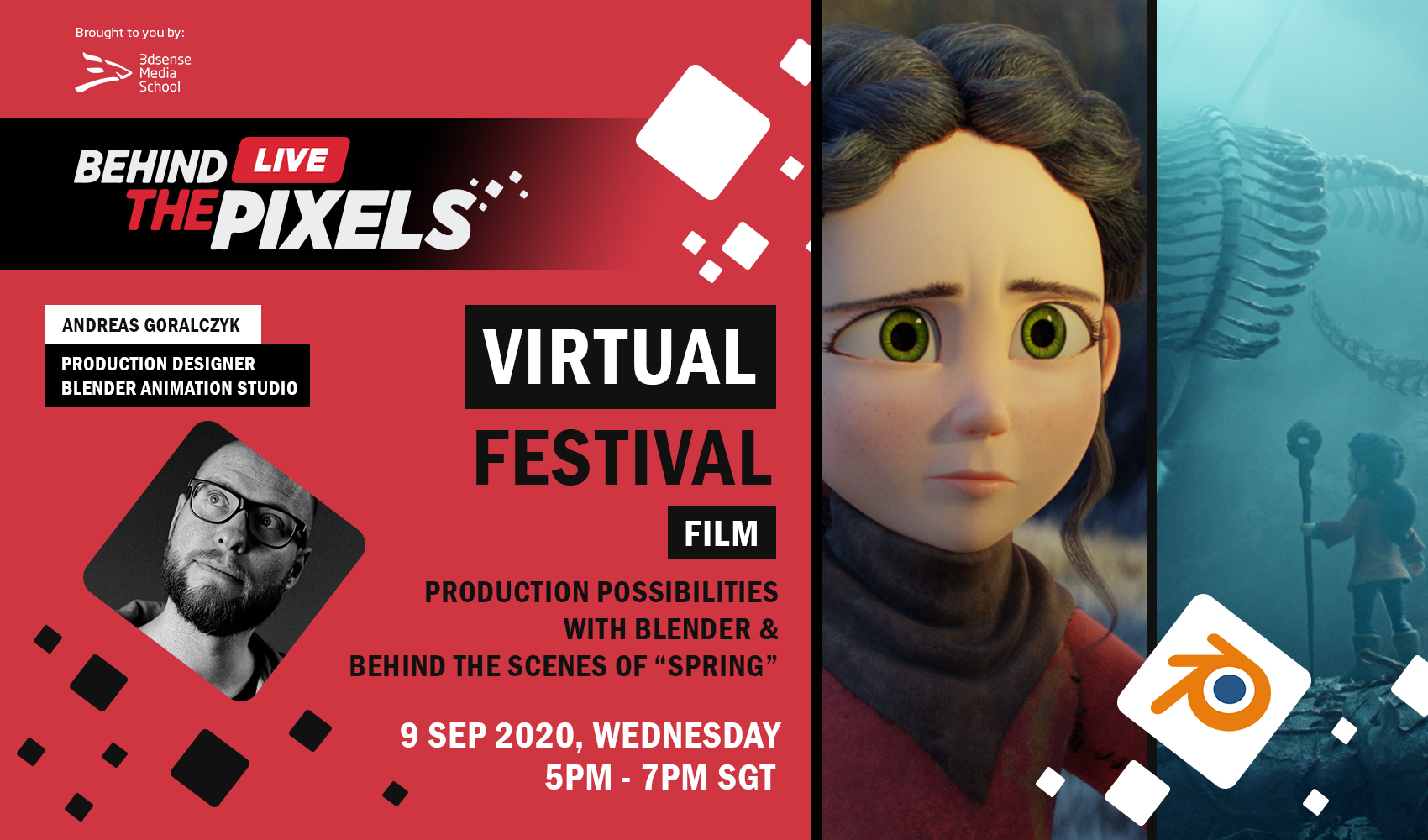 Film: Production Possibilities with Blender and Behind The Scenes of “Spring”
By Andreas Goralczyk

Blender is a powerful 3D creation suite used in a variety of productions. And one of the best parts of Blender? It is open source, meaning that it is free to use and constantly being improved by the community. In a nutshell, it is a tool created for artists by artists. Since 2018 with the introduction of Blender v2.8 as well as the Blender Development Fund (https://fund.blender.org), it has been gaining widespread adoption throughout the industry.

In this session, we will dive into how Blender was used in the short film “Spring”, which was produced entirely by Blender Animation Studio and released in April 2019.

Andreas Goralczyk is a production designer at Blender Animation Studio. With his work on character art, lighting and effects, he has contributed to defining the look and feel of most Blender Open Movies during the past 10 years. His credits include Big Buck Bunny, Cosmos Laundromat and Agent 327: Operation Barbershop. He recently directed the computer animated short Spring, a poetic story about the eternal cycle of seasons. 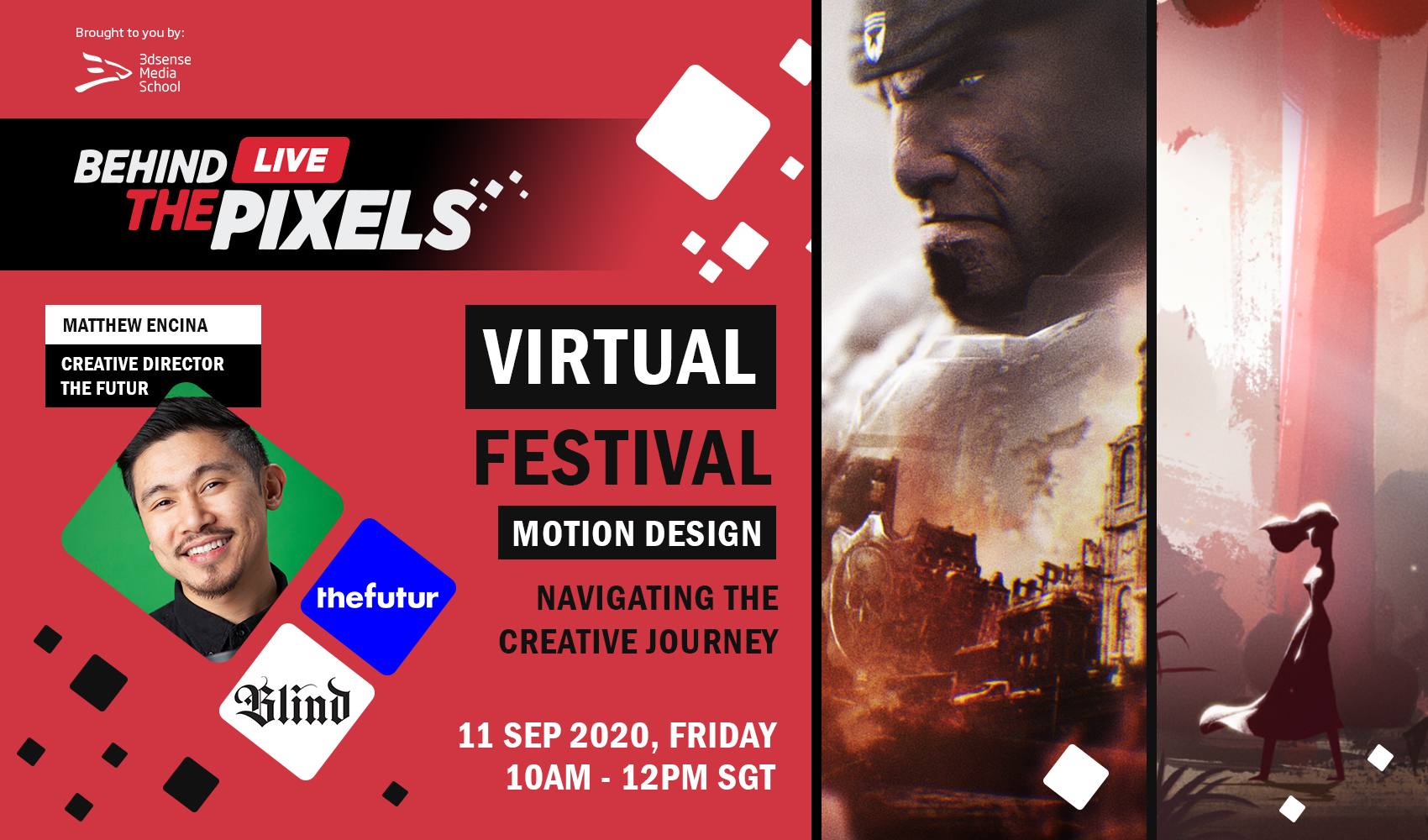 Starting out is arguably one of the toughest parts of an artist’s journey. In this interactive webinar with Matthew Encina, he will be sharing about his creative journey as well as some of the hard lessons he has learnt along the way. We hope that through this session, the artist’s career roadmap can be demystified and you, as a new artist, are able to gain a deeper understanding of the design industry.

Matthew is a creative professional working over 15 years, in the fields of design, advertising, and content creation. He is recognized by the creative industry, winning multiple awards including 3 CLIOS for his work with Xbox, and 3 Webby Awards for “Ink”, the groundbreaking interactive music video for Coldplay.

As an online educator, Matthew creates content and courses at The Futur, where he shares insights and stories from his journey as a creative professional, to help others navigate their own. Beyond the digital screen, Matthew speaks at international conferences and events about his experiences in the industry. 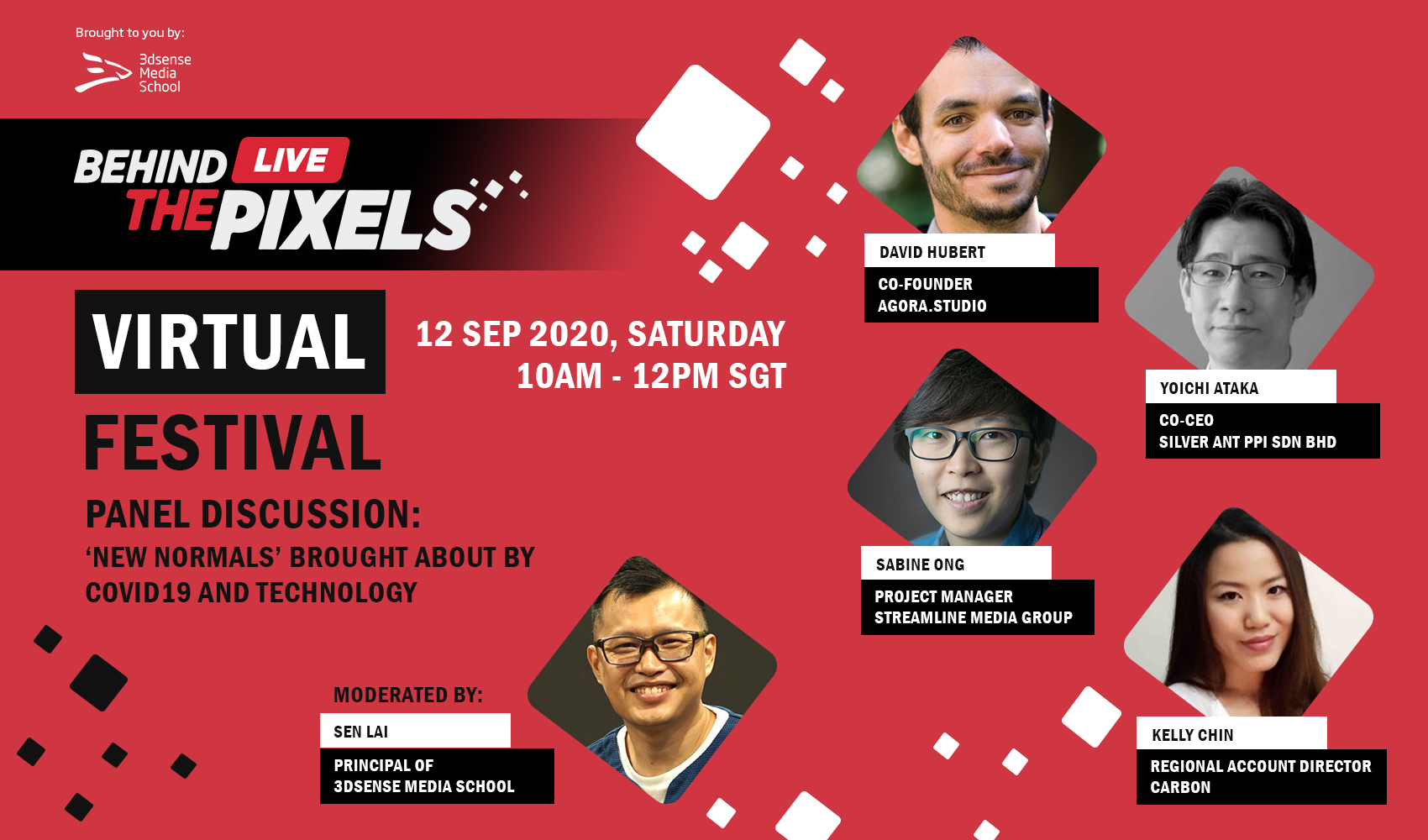 In this panel discussion, we will discuss how the recent pandemic has affected or revolutionized the digital entertainment industry in the areas of production and hiring practices. We will also explore some of the innovations and impacts that new technology has brought to the table.

Co-founder of the virtual studio Agora.Studio, David always dreamed of making movies in his childhood. Soon after finishing animation school in Montreal, he traveled the world and went to work as a character animator on many feature productions including Happy Feet, Hellboy: The Golden Army, Shrek Forever After, Kung Fu Panda 2, Puss in Boots, Madagascar 3: Europe’s Most Wanted and The Croods. More recently he was supervising animation and directing video game cinematics for the Deus Ex and Tomb Raider franchises at Eidos Montreal. He also remains very much involved in online education with iAnimate.net and sometimes takes the stage at events such as CTN, GDC and DICE to share his passion for animation and storytelling.

Kelly’s role at Carbon has taken her from marketing and growing Carbon’s online presence, to leading the project team as account director in their Hong Kong headquarters. During her tenure, Kelly has been involved in every facet of the business – from operations to recruitment – understanding that no man is an island, and that team, talent, and culture, are paramount to an organisation’s growth. Working closely with the design and production team, Kelly’s ardor for creative projects has gleaned a reputation for relentlessly going above and beyond to deliver impact.

Fuelled by hiking adventures and inspired by outer space, Sabine is a project manager at Streamline who coordinates high stakes projects for AAA and III productions. With more than 20 projects under her belt, she has worked on titles like Death Stranding, Monster of the Deep: Final Fantasy XV and Street Fighter V: Champion Edition. She is also part of the hiring team, recruiting and growing V.U.C.A. (which stands for volatility, uncertainty, complexity, ambiguity)-resistant talents for the next generation of gaming technology.

Yoichi Ataka joined Polygon Pictures Inc. (PPI) as the Chief Operating Officer in January of 2006. Yoichi spearheaded the transformation of PPI from a boutique studio of approximately 80 staff to a full-scale CG animation studio, which now holds about 400 staff in Japan and Malaysia combined.  Fully leveraging his business consulting background, Yoichi introduced the business process streamlining concept to the creation processes of animation at PPI. He is currently Co-CEO of Silver Ant PPI Sdn Bhd, located in Petaling Jaya, Malaysia, which is a joint venture between PPI and Silver Ant.

Before joining PPI, Yoichi was a business consultant for more than 10 years at a global management consulting firm, A.T. Kearney and Japan Management Association Consulting, specialized in strategy formulation and operation optimization. Yoichi holds MBA from Yale School of Management and BE from Waseda University School of Science and Engineering.